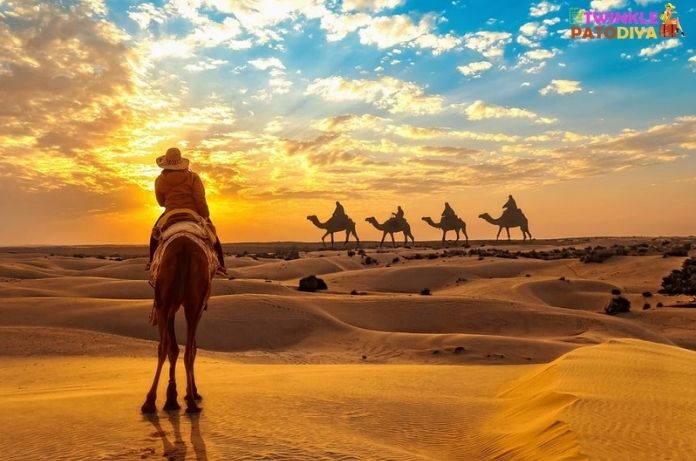 visit in Jaisalmer
If geology interests you, then Jaisalmer requires you to travel. Wood Fossil Park or Akal is located about 15 kilometers from the city. Here, one can discover and trace geological tragedies that occurred 180 million years ago in the Thar Desert. The city of Jaisalmer also serves as the border of western Rajasthan (and India). This ‘Golden City’ is located close to the Pakistan border and adjacent to the Thar Desert. The most prominent landmark of the city is the fort of Jaisalmer, which is also known as the Sonar Fort (Golden Fort).

Best time to visit in Jaisalmer

The best time to visit Jaisalmer is from November to March when winter comes to the desert city offering a pleasing weather as at this time the temperature in jaisalmer remains between 5 degrees and 24 degrees centigrade.

These five places I visited on Jaisalmer tour and found it most attractive. Here is the fort, Havelia, a lake, sand dunes, and the most special place which the Indian soldiers have watered with their blood.

The name of Jaisalmer fort (Golden Fort) comes first in the list of places to visit in Jaisalmer, walking in Jaisalmer without visiting this fort is incomplete knowledge, if you come to Jaisalmer, then I would advise you to go here first and rest of the places later. This is a huge fort where people still live inside the fort. The fort was made of yellow sandstone and when the rays of sun falls at it at sunset or sunrise, it shines like gold, hence it is also called Sonar Fort.

The second place in the list of Places to visit in Jaisalmer is a lake built by Maharawal Gadsi which is named as an oasis in the desert. This lake can be visited after seeing the fort, this lake is a boon for those who are fond of taking photographs.

Patwaon ki haveli is a group of five havelis built by a merchant named Guman Chand Patwa in the early eighteenth century. They are also known as the first mansion of Jaisalmer. This Havelia, built in the Rajput and Islamic style, comes at number three in the list of Places to visit in Jaisalmer. It is built after crossing a narrow lane some distance away from the fort.

If you believe in ghosts and want to see ghostly place, then Kuldhara village of Jaisalmer is the best place to visit in jaisalmer for you.

This is the place where Desert Safari is the most famous, there is a village where there are sand dunes and it is done with camping and camel and jeep safari. Especially on the occasion of New Year there are cultural events, the distance of Sam  is 40 km from Jaisalmer, it is 15 km from Kuldhara.

Longewala’s battle site comes at number six in the list of places to visit in Jaisalmer, Longewala is the place where Pakistan attacked in 1971 and only 120 Indian soldiers drove out Pakistan’s army of thousands. This place shows sacrifices of our soldiers, here is the destroyed tank of Pakistan, as well as the history of that battle can also be seen.

The Tanot Mata temple got famous due to a miracle which happened during the war of 1965 when even 3000 shells fired by Pakistan could not scratch this temple, even today the shells are kept by governments for tourists.

Must-See Attractions in Ooty Elevation That You Should Visit

Your One And Done Jaipur Travel Tourism Guide Is Here

Jaipur is one of the biggest tourist points in India. 100s of tourists around the…