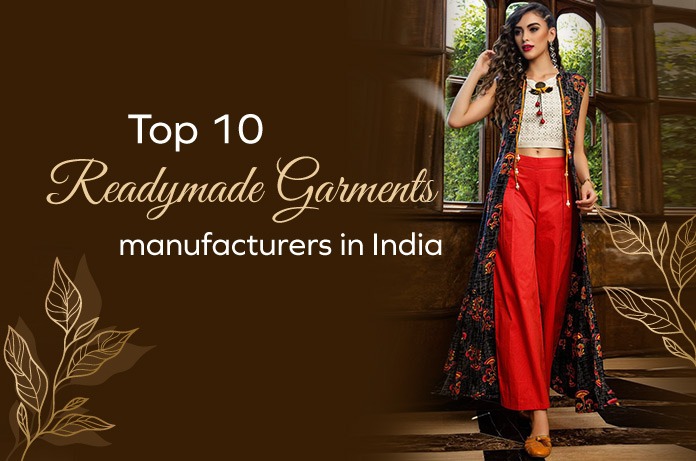 India’s clothing industry has one of the most illustrious and ancient histories. The ready-made garment manufacturers market, also known as the clothing market in India, has experienced steady growth in recent years. In addition to becoming some of the top clothing suppliers in the world, many of India’s top garment producers have recently made significant contributions to the growth of the nation’s GDP. They have achieved great success in the key areas of clothing production, exports, sales, and employment for the country’s textile industry.

Over time, several regional clothing manufacturers in India have evolved into well-known garment suppliers as a result of the industry’s marvellous growth. India has established a reputation in the world’s textile industry as the second-largest exporter of textiles. Reaching the public has also never been simpler thanks to influencers who promote various small garment businesses and merchandise on websites like YouTube and Instagram.

Here are the top 10 readymade garments manufacturers who are well-known not only in India but also around the world.

Arvind Ltd, which was founded in 1931, is widely considered to be India’s largest denim readymade garments manufacturers. Surprisingly, their product line is not limited to denim. Cotton shirtings, knits, and bottom-weight fabrics are also popular. They own 27 different brands. Flying Machine, Excalibur, and Newport are among the most well-known, as are their licenced international brands such as Tommy Hilfiger and Arrow. They have their company headquarters in Ahmedabad, source over 30 million products, and have a long history of being India’s first denim manufacturers.

Another well-known clothing manufacturers in India, Alok Industries Ltd was established in 1986 and specialises in polyester and cotton goods. They have diversified their company over time to include things like knitting and weaving. Due to their unwavering quality standards and top-notch facilities, they continue to have a strong reputation in the clothing industry. They are without a doubt one of the biggest garment manufacturers in the world, not just in India, with a sizable domestic and international customer base.

Bombay Dyeing and Manufacturing Company Ltd, headquartered in Mumbai, was publicly incorporated in 1879 and obviously achieved a place in the list of the top 10 readymade garments manufacturers in India. The company’s businesses in retail textiles and polyester staple fibre are well known. Most of the developed nations in the world, including the United States, Europe, New Zealand, and Australia, are among the destinations for its exports. They have been successful for more than a century thanks to their high-quality goods and cutting-edge designs.

The 1986-founded Bombay Rayon recently celebrated its 25th anniversary in business. One of India’s top textile producers, it is home to the largest single-roof fabric processing facility in the country.

The company has grown to become the one of the prominent clothing manufacturers in India of multiple fibres in addition to being India’s largest shirt manufacturer (with a processing capacity of 400,000 metres per day). Tencel, Modal, cotton, polyester, wool, and other blends are just a few of the materials used to make their products. The goal of Bombay Rayon is to deliver fast turnaround times for the production and supply of apparel. Providing the highest level of customer satisfaction has undoubtedly been made easier by this.

Mumbai-based readymade garments manufacturers, Welspun India Limited is a textile business that was established in 1985 as a Private Limited Company. One of India’s global conglomerates with the fastest growth is this one.

With 94 percent of its exports going to more than 50 countries, it is the largest producer of terry towels in Asia and the second-largest producer overall. As part of their home textile products, they provide textiles for bedding, drapery, and home furnishings. They consistently produce high-quality clothing that satisfies international standards.

Sutlej Textiles is a member of the Mumbai-based Fabric Mills industry, which employs over 10,000 people and brings in about $257.62 million annually (USD). They sell everything from cutting-edge home textiles to eco-friendly fibre.

They are the largest garments manufacturers in India and exporter of blended- and synthetic-dyed spun yarn in India. By utilising some of the most recent technologies in the clothing industry, they are consistently able to meet the constantly shifting needs of their customers.

In 1965, Vardhman Textiles Ltd. was established with about 6000 spindles. It belongs to one of the biggest vertically integrated textile groups and readymade garments manufacturers in India. It now has over 1.1 million spindles and produces over 20,000 tonnes of acrylic fibre annually.

They produce alloy steel, sewing threads, yarn, clothing, and acrylic fibre. They have developed and expanded over the years into a sizable garment company with operations in 75 other countries in addition to India.

The largest integrated fabric manufacturer in the world is Raymond Ltd, which was established in 1925 close to Thane Creek. Its headquarters are in Mumbai, and it has made investments in cutting-edge technologies to help with production.

It is the biggest readymade garments manufacturers of woollen fabrics in India and has retail locations all over the nation. They market goods like designer clothing, clothing, and denim. The company has a market share of more than 60% in India and is well known for its suits.

One of the largest readymade garments manufacturers in India, yarn cotton knitted fabric, and wind power is KPR Mills Ltd., which was established in 2003. With a 95-million-unit capacity annually, the company runs one of India’s largest garment manufacturing facilities. They also have the most up-to-date equipment that complies with global standards. Some of the top fashion brands in the world use KPR’s combed, grey melange, carded, and compact yarn.

A leading clothing manufacturers in India of bed linen, yarn, paper made from wheat straw, bath towels, and chemicals, among other things, Trident Ltd was established in 1990. The company has developed over the years to become one of the biggest exporters of home textile products, with a sizeable market share in the global apparel sector. Additionally, well-known are its cotton terry towels, which are exported to more than 100 nations.

Many of top readymade garments manufacturers in India have expanded to become some of the world’s top suppliers of apparel, succeeding in crucial areas like clothing production, exports, sales, and employment for the country’s textile industry while also making a sizable contribution to GDP growth in recent years. Check out on Indian ethnic wear and how to become a fashion designer.

Read more: How to become a brand in online industry.

The Reason Why We Love Startup Ideas

Rejuvenate yourself in a full body massage spa in Jaipur