The New Parliament Building: Just A Waste Of Money? 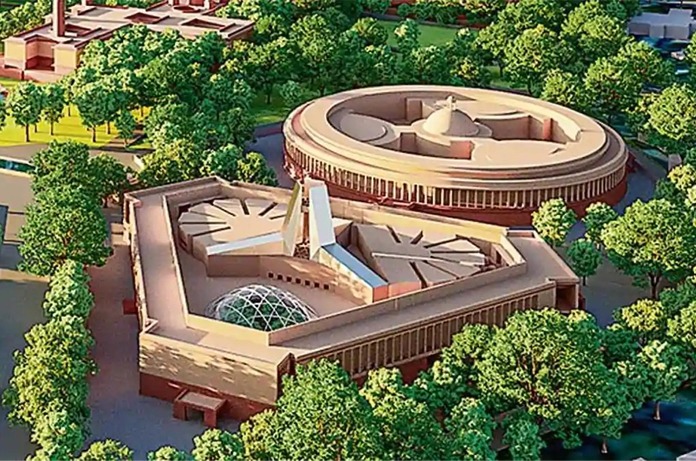 PM Narendra Modi on 10th December, after nearly 100 years the foundation of existing Parliament was laid, laid the foundation of a building which will replace the Parliament House. The new parliament building will cost around 970 crores and is scheduled to be inaugurated in 2022 on the 75th anniversary of India’s independence.

The ceremony was attended by leaders from various political parties, cabinet ministers and ambassadors of different countries and the ‘bhoomi pujan’ at the new Parliament building site was performed by the Pujaris from the Sringeri Math Karnataka. After the ‘bhoomi pujan’ Prime Minister Narendra Modi in a speech said that today is a historic day and a milestone in India’s democratic history.

According to a official statement released by PMO(Prime Minister’s Office), the building is an essential part of ‘Aatmanirbhar Bharat’ and will be build people’s parliament for the first time.

Although the proposals for a new parliament building emerged in early 2010s on account of stability concerns with older structure and it suffers from inadequacy of space to house members and their staff.

Soon after the ‘Bhoomi pujan’ the debate has been started whether the construction of new parliament building is necessary or not?  In its defense government is claiming it an idea of Indian National Congress as the planning of this new parliament building started back in 2010 when INC was in power but main reason of this debate is not the occurrence of the event but it is the timing at which the event is occurring.

At this moment country is facing two very big issues one is Pandemic and other one is Farmers’ Protest. Due to the Pandemic the GDP growth of the country is already in negative which has resulted in spike in unemployment rate. On top of it Indian Farmers are protesting against the farmers’ bill 2020 since September.

In moments like these does our government really need to spend or say waste hundreds of crores of rupees in just construction of one building? The answer is very obvious. “It is criminal waste of money” INC quoted.

The focus of Government should be to tackle the issue of farmers and on providing new employment opportunities instead of spending on its luxury needs.

Although the construction of the building depends on a petition which is pending in the Supreme Court of India, which challenges the project. However, the apex Court has  allowed the conduct of the foundation-laying ceremony but the actual construction will begin after verdict of the court.

The current Sansad Bhavan or better called Parliament Building is the seat of the Parliament of India. It is located at a distance of 750 meters from Rashtrapati Bhavan. The building is situated along the Sansad Marg which crosses the Central Vista and is surrounded by the India Gate, war memorial, prime minister’s office and residence, ministerial buildings and other administrative units of Indian government. The Lok Sabha and the Rajya Sabha which represent lower and upper houses respectively are present in India’s bicameral parliament.

The existing building’s architecture is inspired by the Chausath Yogini Temple, Mitaoli and was built under British empire for its Imperial Legislative Council in 1927. As soon as the British rule ended in India, it was taken over by Constituent Assembly of India which was succeeded by parliament of India once Constitution of India came into force in 1950.

The new Parliament is likely to have a triangular shape. It will be much bigger than former one and will be built next to the existing complex. By 2026 the Lok Sabha may need to have 848 members, so the new complex will have 888 seats in Lok Sabha chamber and 384 seats for Rajya Sabha chamber. There will be no central hall as Lok Sabha chamber itself will be able to house 1224 members in case of a joint session.

The building will be a 4-storey structure which will have the offices of ministers and committee rooms in the building itself. The building will be built on an area of 64,500 sq ft (5,990 m2), which is 17,000sq ft more than existing structure and it will be earthquake resistant. Architectural styles from different parts of India will be incorporated.