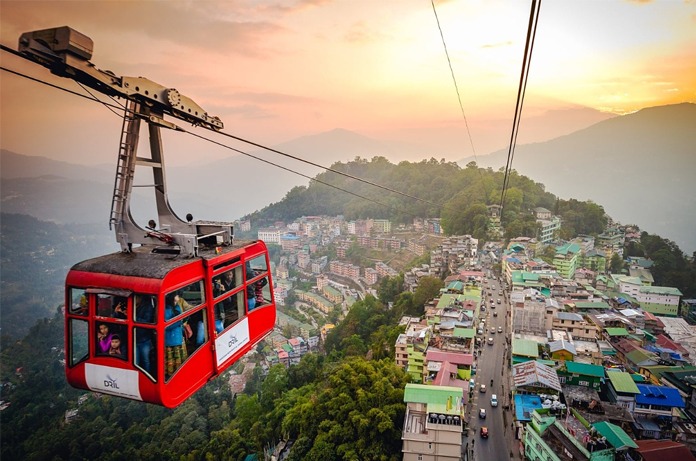 Gangtok means hilltop, which is apt because that’s exactly where the town is found. This makes this capital city of Sikkim one among the foremost beautiful hill stations in India and heart of Sikkim Tourism. This Northeast paradise is certain to captivate all of your senses.

Best places to visit in Gangtok

Gangtok is among few places in India which can be called as an epitome of neatness, cleanliness and discipline. With the stunning view of the snow-capped Mount Kanchenjunga and the surrounding mountains, the town offers comfort to your eyes and your mind. Gangtok is a city of great food, atmospheric sceneries and delightful Buddhist monasteries, which includes Rumtek and Enchey. Top sights in Gangtok, includes the Nathu La Pass and Tsomgo Lake. Khangchendzonga National Park,  Lake Tsomgo,  Nathu La Pass, Tashi Viewpoint and Seven sisters waterfalls are some of the many famous places to visit in Gangtok during your trip.

Gangtok has lot to offer if you are an adventurous and fun-loving person you can enjoy mountain biking to rangpo which is longest biking route in Sikkim, paragliding, cable car ride and a lot more.

Gangtok is additionally a testament to the unique fashion sense of the North East. The people here are known to possess a keen sense of fashion and have a completely refreshing way of wearing the foremost casual outfits. Gangtok also features a very folksy and indie live-music sentiment. It’s helpful and friendly citizens, are true exemplars of the principles of the Buddhist lifestyle.

I took a five-day trip to Gangtok in summers and it was an amazing experience. I tried river rafting in Teesta river, spent the night in camp alongside river Teesta, went on day and night trek, tried Yak riding on the way to Nathu La Pass, went on sightseeing and much more. The first time I went on the city streets I felt like I am on foreign land, I was amazed to see the cleanliness as well the discipline.

The best of all was to go and access the  world’s highest ATM  using a permit, it is located on Nathu La Pass, a part of the historic Silk Road and to swing on live music at Cafe Live and Loud, on Tibet Road.

For shopping you should visit MG Marg which is a shopper’s paradise. You can buy clothes, accessories, gifts and souvenirs from here. The markets sell Sikkimese Cups, which are made of porcelain and have printed inscriptions or pictures on them.

Gangtok, the capital of Sikkim, is a city that’s known for its beauty and wonderful weather. The normal society, influenced by an old and vibrant culture, adds to the magnificent charm of Gangtok. This is one of the strong explanation why Gangtok Tourism is flourishing so much and travelers from everywhere around the country and across the globe visit this travel destination in huge numbers per annum.

The best season to visit Gangtok is ultimately a matter of preference and convenience, as an example, if you’re fond of snow and can comfortably bear low temperatures, you should visit Gangtok during winters. Winter temperature in the region averages between 4 degrees and 7 degrees. On the opposite hand, if you would like to enjoy the greens of Gangtok, you should plan the trip during the summer season. During the summer that are from April to June the temperature in Gangtok ranges from 20 degree to a maximum of 27 degree and is the ideal time when one can find and discover a relishing holiday.

From adventure to sightseeing, there are many activities to try in Gangtok which tourists dream of. Staying in the best Gangtok hotels will make your trip to Gangtok even more comforting as well as enjoyable.

One more reason to visit Gangtok is that you can plan a road trip from Gangtok to Darjeeling anytime during your visit. It is merely a three hours drive.