Unique themes for fashion show based on Indian tradition 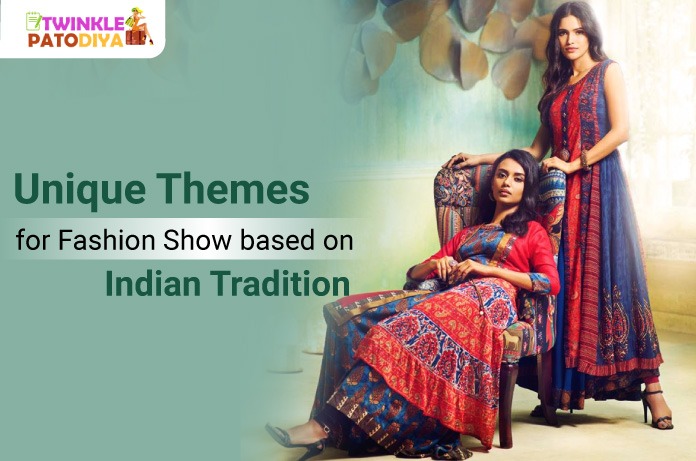 Each year, fashion trends are upgraded and so does the themes for fashion show. Nowadays, fashion is more than just a way to express oneself through clothing. Before you say or do anything, your clothes speak and convey who you are. People greatly enjoy and support Indian traditional fashion show themes because they are universally appealing. Indian men and women traditionally dress in a wide variety of styles, each of which is related to the region’s culture, religion, and climate.

Today, we are going to talk about the amazing types of traditional Indian wear, that you can use as fashion show theme ideas for both men and women.

Best themes for a fashion show based on Indian tradition

Wearing ethnic Indian dresses on a fashion show is one of the best themes for a fashion show based on Indian tradition. India is a multicultural melting pot. The fashion show can easily incorporate the culture of various regions, races, and religions. Every state in India has a distinct culture and fashion sense. The beauty of handwork can be reflected in the fashion show. You can also experiment with fusion wear. Fashion wear is the combination of two or more styles to create a distinct look. For fashion show theme ideas based on Traditional wear, you can combine the styles of different states to create a one-of-a-kind look.

The saree is an Indian traditional wrap and round costume that dates to the Indus Valley civilization. It is one of the most well-known styles of Indian clothing that is used in Indian traditional fashion. There are 80 different styles of classical drapery sarees across the subcontinent, rather than just one. Pleat less Bengali, Odi styles, Kodagu styles, Malayali styles, and so on. A saree is made up of a blouse and an underskirt, over which a cloth is draped in the desired style. Sarees were traditionally drapery garments. But now there is a substitute: the stitched and pre-stitched saree, which can be worn like gowns and does not require draping.

The most basic and straightforward cut is usually straight with a slight flare, down to the knee, occasionally embroidered or embellished. A classic sherwani exudes wealth and has a timeless quality that never goes out of style. Sherwanis originated as a northern Indian dress for Mughal royalty and have since evolved into modern Indian ethnic wear for men.

This ensemble, also known as a lehenga choli, consists of a long-pleated skirt, a cropped choli, and a scarf or dupatta. It dates to the Mughal era and is still one of the most popular garments among women today. Other than the saree, which is appropriate for formal occasions such as weddings, this is one of the most common types of Indian attire used in themes for fashion show. The lehenga choli is still prevalent, along with the long skirt choli and dupatta. However, the styles, silhouettes, and surface work of the choli, dupatta, and skirts have changed in recent years.

Indian suits are cut similarly to western suits, but with an Indian flair added through fabrics, royal colours, and embroidery or embellishments. Indian suits are available in a variety of colours, including maroon, burgundy, black, blue, and grey. Rich cotton, brocade with Indian embroidery, or sequin embellishments are popular fabrics. A Jodhpuri suit is the pinnacle of Indian traditional fashion for men.

Dhoti is the traditional male attire of the Indian subcontinent and widely considered fashion show theme ideas. It is a rectangular piece of cotton or muslin fabric wrapped around the waist and partially covering the legs. It must be wrapped around the waist and legs and knotted in the front. Originally intended for Indian men, the kurta has evolved with a modern twist to become a widely popular option in women’s wear as well.

Dhoti evolved from drapery to a stitched style that is more easily worn and preferred by many Indian men as daily wear or nightwear. Dhoti has also established itself as an important component of Indian women’s wear by continuing to appear on themes for fashion show.

Achkans are sherwanis with a front button placket. It is almost like a knee-length jacket buttoned in the front for a more formal appearance. It can be plain, patterned, or embroidered and worn with chooridar pants, dhotis, or salwar. Ideal for special occasions such as weddings, sangeets, and festivals. These are frequently used in themes for fashion based on Indian tradition.

Anarkali is a combination of a long frock-style flared kurta and tightly fitted churidar pants. An anarkali dress is fitted to the waist and then flares to the knees. Anarkali is one of the types of Indian ethnic wear that has recently made a comeback after decades of absence. The contemporary designs are floor-length and gown-like. It usually appears royal, classy, and comfortable. Jacket style, cape style, tiered, floor-length, and gown style are all modern anarkali suit styles.

Themes for Indian traditional fashion shows change every month, week, and day. There are no limitations in fashion as you can wear whatever you want and incorporate it into fashion shows. There are thousands of different things you can experiment with in addition to the fashion show theme ideas mentioned above.

Rejuvenate yourself in a full body massage spa in Jaipur